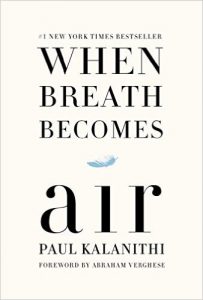 Death, undoubtedly, is a difficult topic; to think about, to talk about. To the  living, and the healthy, death demands barely a thought. Only in the aftermath of a sudden death, or in the face of a looming illness, are  we forced to contend with it.

There are those whose professions force them to face death, daily; physicians, nurses, first-responders; does this impact the way they view their own death, make it somehow less abstract, less distant?

Paul Kalanithi’s When Breath Becomes Air, both a debut and final book, is infused with death – in the knowledge of its imminence. It is a book of a man coming to terms with a life about to be cut short before an indelible mark can be made in it. Paul Kalanithi was a resident in neurosurgery when he was diagnosed with terminal lung cancer – in one fell swoop, he transitioned, from doctor, to a ‘doctor-patient.’, and finally, when he could no longer work, to just ‘patient.’ He writes, “Death, so familiar to me in my work, was now paying a personal visit.”

Paul’s words provide us with great insight into the intricate art of neurosurgery. He writes about a ‘suboccipital craniectomy’ he performed, as “one of the most elegant surgeries…that night, I felt fluid: the instruments were like extensions of my fingers: the skin, muscle, and bone seemed to unzip themselves…” Even after his diagnosis, and a bout of chemotherapy that shrank his tumour but made him very sick, Paul returns to work, with the help of medication. “Everything felt familiar, muscle memory kicking in”, he wrote. “On day three, I was removing a degenerated disc from a patient’s spine.” He goes on to describe how the “more elegant way I had learned to do this…came back to me in a flash” and he finished the remaining procedure in thirty seconds. It is clear that Paul was skilled at his craft and drew immense pride from it.

Time becomes very important for Paul. It is the amount of time he has left that will dictate how he will spend it; and yet, this is the one thing he does not, cannot know. This is something that seems to connect us all – the absolute unknowing of how much lies ahead. And he tries very hard to know, asking for Kaplan-Meier survival curves of his oncologist, who refuses.  Paul writes of the way he, the doctor, and they, the families, see time – “[The families] see the past”, he writes…”I see the possible futures, the possible long, painful, and only partial recovery…I had to help those families understand that the person that they knew…now lived only in the past.”

The derivation of meanings – of life, of his choices in particular (medicine, and neurosurgery), and the responsibilities and mastery of his work, play a central role in the prose. “Like my own patients, I had to face my own mortality and try to understand what made my life worth living.” For Paul, perhaps that meaning was his work; the text feels most fluid when Paul writes about his surgeries.

Other things in the text, however, felt left unsaid – people, feelings, relationships – the intangible themes, the ones we can neither measure nor quantify. Lucy, Paul’s wife, who wrote a poignant afterword and helped stitch the book together after Paul’s passing, exists only briefly in the text, as does their child. Paul ends with a message, to his daughter, these two lives intersecting but barely, that leaves one with an aching hint of what, really, is important in this world.

Somehow, the afterword, written by his wife, a doctor herself, felt most poignant of all; the difference, perhaps, was that while Paul was writing about something still in the future, but just so, something not yet come to pass, Lucy was writing about what had. She knew the ending; he knew of it only in the abstract.  Does the experience of finality, of the persons closest to us (for it can never be our own), lend, in some ways, a necessary nuance to the derivation of life’s meaning? We tend to think of death as life’s opposite; but it can also be seen as the completion of the journey that began at birth. “Life,” as Eckhart Tolle writes, “has no opposite.” Can we, any of us, then neatly prescribe meaning to our own lives, why we do and have done the things we do, before this journey, our life, has been completed?

Paul spent the last few years of his life carving meaning out of what he knew: his craft, the thing he spent hours of his life pursuing, to the point of self-medication to survive the arduous hours. He checked off milestones before the end neared– marriage; graduation; an exciting job offer; baby. One wonders, though, if it is Lucy, or perhaps their daughter, if she goes on to write, who might help fill in the blanks that Paul began.

When Breath Becomes Air provides a brief glimpse into the life of an accomplished doctor, a man driven to achieve his greatest ambitions against all odds. It is a powerful, impactful book, one that forces us to think of difficult issues and wonder how we would feel, what we would do, where we would draw meaning if we too, were thrust with the unthinkable.

Linkedin
0
No comments yet
book review death and dying

This site uses Akismet to reduce spam. Learn how your comment data is processed.